Start a Wiki
My first new game on random map at the "normal" difficulty level; started fairly soon after I got an overwhelming victory at the first vote in my second try at "Beginner" mode.

(Indented lines are generally direct quotes from the game display.)

"Like any port or depot, your city will draw in resources from the surrounding countryside. Your city will be the hub of your transport network and your industrial command center."

Mouseover shows that a coastal site is required. I choose one that will have minimum overlap with the site of a later port that will exploit a grain farm on a promontory and two cotton farms, the chosen site having a reasonable amount of food plus timber.

"Give Transport Orders" is the first button in a row of four key buttons that appear at the top of most screens and just below the mini-map on the map screen. It leads to the Transport Ledger, which currently shows 2 Fish and Livestock, 4 grain, 3 timber, thus using (as shown in the Transport Capacity total at bottom right) 9 of the 15 freight cars indicated. A red line draws attention to the fact that there's an exploitable surplus there: we won't need to build more cars for a while. In addition to the three detailed icons that have numbers, there are 15 greyed-out icons hinting at future products. Mouseover each, and in the top right we see its name plus "Warehouse:" and "Needed:" followed by numbers. The numbers for the three that we produce (and another one that will soon become significant) were not noticed at the start. After we reduced the population to 6 the numbers were:

Buttons at top left and right take us back to the map or to a "Help from your Interior Minister" menu "Transport Ledger Briefing".

"Give Industry Orders", the second key button, takes us to the city, in isometric view, presumed (for purposes of description here) to be viewed from the south. There are eight existing buildings plus spaces for future buildings.

In the bottom half of the picture are spaces clearly indicating six future buildings that we can build. They are functionally in pairs, with a primary processing mill next to the main spine road and a related finished goods producer south-east of it. A rail siding serves all buildings. Mouseover will show that each building requires two units of input material and two labor units for each unit of output.

From left to right the pairs are:

The factories have capacity 1 and cost one lumber and one steel to build; the mills are double that in all respects. Each can later be enlarged, using lumber and steel in greater amounts.

With our three timber units per turn, we will be able to produce three units of furniture every four turns if we have lumber mill and furniture factory built in time and enough labor to staff them whenever there's material to be processed.

What's in the warehouse

That's more than enough lumber and steel (nine each) to build all six of the buildings we can initially build. Build them all.

Using the one expert worker, two paper, and $1,000, we order one Farmer, who can start improving the grain farms and orchards we see near NZ City, so that they can contribute more when we build ports or depots within range.

That leaves us with a population of 6. Desired food requirements, according to the mouseover of the right side frame pane, are 3 grain, 2 fruit, 1 meat. It seems one person eats one unit of raw food (corresponding with the "6" maximum that we were told about the city), with the total requirements spread over the products in roughly the same proportion as are needed in Food Processing, i.e. half grain and a quarter each for fruit and meat. We produce 4 grain and 2 meat. So what happens to the two that want to eat fruit? We shall see.

Buttons at top left and right take us back to the map or to a "Help from your Interior Minister" menu "Industry Briefing #3" with easy access to previous briefings in the set. 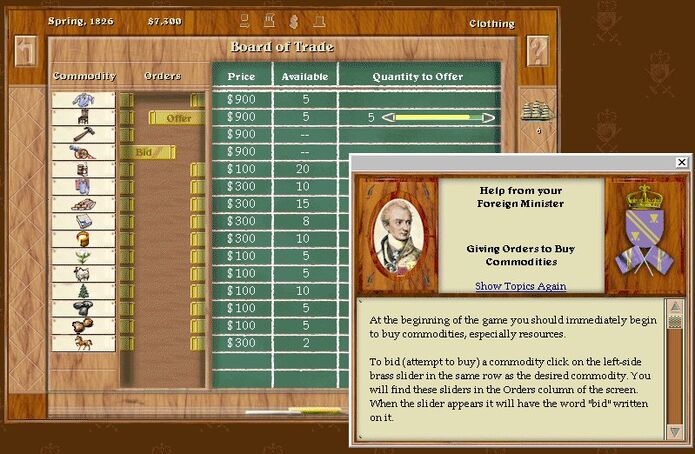 "Give Trade Orders" is the third key button, taking us to a screen that lists 15 commodities (all currently possible products except individual raw food items). (The above screenshot was from the starting turn of a tutorial game, with prices the same but commodities not.)

For each, we can "Bid" to buy or "Offer" to sell, but not both in the same turn. Prices may change from one turn to another, more or less according to demand. Starting prices:

A column matching the warehouse numbers says how many we have available. Sliders set the numbers we want to offer for sale. (For bids, we will get presented with individual offers and can either accept in whole or in part or reject.)

As we have at present only enough food for our current population, we will not have any immediate desire for clothing or furniture to attract immigrants from the countryside; we therefore offer one of each for sale (just one so as to see which way the market will be trending - and so that we don't waste potential "diplomatic points" by selling two to the same nation). We also offer one lumber, because we will be replacing it soon with our plentiful timber supplies, and any trade offer accepted will add a diplomatic point in the register of the purchasing country.

Bid for cotton, wool, coal, and iron, because we produce none of them and have mills waiting to add value by processing them. At starting prices, any processing we do in mills or factories will produce a 50% profit (if we have no subsidies operating).

Buttons at top left and right take us back to the map or to a "Help from your Foreign Minister" menu "Trade Briefing #2" with easy access to #1.

"Give Diplomacy Orders", the fourth key button, takes us to a map of the whole world with nation names. Five tabs change the map and accompanying text in various ways, letting you click each nation to see a variety of information about it and in some cases take action.

Knowing the great value of Trade Consulates, we spend $8,000 setting up one in each of the 16 Minor Nations. (Hindsight suggests that that's far too many to start with - AI nations seldom start with more than a couple.) That will help swing some of them our way. Most of them (curiously, because no trades have yet happened) currently have Great Powers Bin or Vasolo as their "Most Favored Trading Nation". Minor Nations look first to their favorites when selecting a trading partner for any desired buying or selling. If the favorite isn't in the market for that commodity, or fulfils only part of the demand, the minor nation looks to its second favorite, and so on down the list. Second and subsequent favorites can be ascertained not from the trade map and text but from later examination of the Trade Pages that are available at end of turn, where each commodity's page shows which nations were offering (listing their preferences among the bidders).

Buttons at top left and right take us back to the map or to a "Help from your Foreign Minister" menu "Diplomacy Briefing #1" with easy access to later briefings in the set.

We will want more than four items traded each turn, and we can afford some merchant ships, so we order two Indiaman units, each costing 3 fabric and 7 lumber (cheaper than two traders and with the same capacity).

Train the four unskilled workers. (They could wait for guns and become cheap army units but there's no need to waste their potential at this early stage.)

Set engineer onto railroad building - primarily to reach fruit - and prospector to check a mountain.

Leave the army guarding the capital.

We are offered two cotton @ $99 and accept one, noticing that we have only three holds left, so we must have sold something. Two other MNs offer one cotton each, and we accept.

Deal Book appears and shows that we sold one furniture @ $906 and that one other MN offered cotton and two offered wool. At least one of those Indiamen will be useful next turn.

Read the newspaper without taking it too seriously. Useful information seldom appears.

Prospector draws blank and moves to try a hill.

Farmer goes to start work on a grain farm.

Food: 0 fruit, 1 grain, 1 meat, 18 cans - so the two workers who wanted fruit are consuming the rather expensive canned food; we have 9 turns in which to start transporting fruit or (expensively) prepare to buy cans. Rail and the necessary depot will cost $2,300.

World page shows our military and everyone else's "Good" while our industry stands out as "Awesome" (despite producing next to nothing). Other GPs each have 2, 3, or 4 trade consulates; maybe they know more about the game than we do! We are the Most Favored Trading Nation for just the three MNs that we traded with. Offer 5% subsidy to every MN: suddenly they all favor us! Some, incidentally, already indicate that they export coal and iron; they must have fast-working hidden miners!

Profit $3,761; cash $4,670; credit limit $652. Nobody was offering coal. No traders for hardware, arms, food, fabric, lumber, paper, steel, cotton, timber, horses? (Hindsight again - we think that that can mean we weren't offering or bidding on that item and therefore can't see who was.)

Prospector has found iron and moves on. Farmer discovers that he had been carelessly placed on a grain farm that had been pre-improved, so he goes to do a proper start on a nearby orchard.

We sell the world's first hardware.

(Evidently even less of note than in the previous quarter!)

Retrieved from "https://imperialism.fandom.com/wiki/User_blog:Robin_Patterson/Imperialism_1?oldid=7029"
Community content is available under CC-BY-SA unless otherwise noted.