Start a Wiki
The red Great Power has been described as having good coal and iron resources in Imperialism using the map key "Pippin". On the assumption that "Pippin" was a specially designed map key differing from other keys of the same value, there could be value in checking the coal and iron resources on a world created with another key of the same value. Hence this page.

"Introductory" level so as to have more than one prospector easily.

Capital up-river on open range west of hill: 5gr, 4fr, 4mt. Order 2 immigrants, 2 experts, and 2 Indiamen. Expand steel mill and metalworks. Embassy in Dedge and 5% to all four current consulate-partners. Three more consulates in MNs that are useful producers and are a fair distance from Pram.

Build population and military and send railroad south then west towards hardwood.

Relationships with our four original consulate-partners have not appreciably diminished despite proximity of one or two of them, but Twelt has gone back to yellow (#7 in trade preference) despite being quite a distance from Pram. 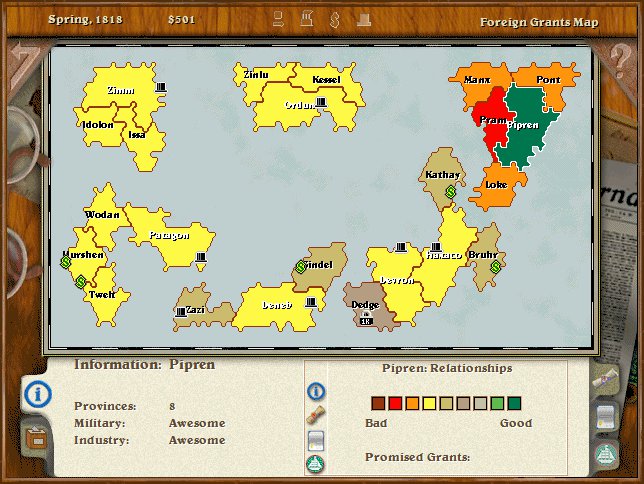 1821 Spring:Developer. Capture Pram City, with a lot of injury but no deaths on our side; just as well we had a Sapper, probably; Lt Artillery were hammered, possibly because we had so few cavalry and other cannon fodder. 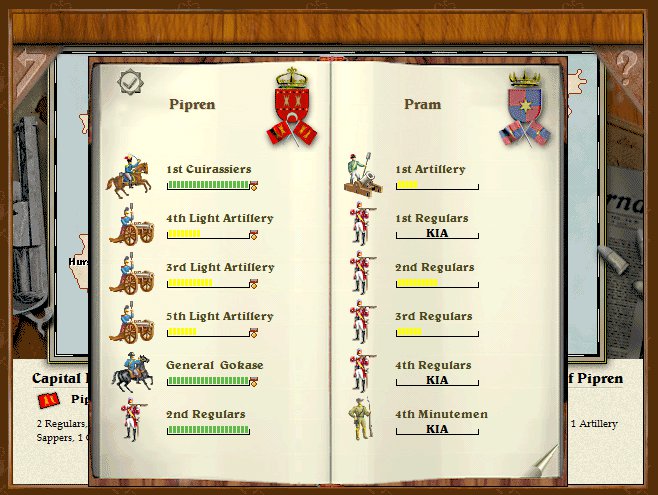 Summer: prospectors have tried all hills and mountains at home and most of the few in Pram; start in Dedge. We have 2 coal and 1 iron reachable without rail through hills; 3 coal and 3 iron available later (or - for some - after conquests. One iron would be available sooner if our capital had been further south.

Relationships since we ceased being at war with any MN: Dedge now Fair (liking us more than it likes any MN); Kath and Sin Ave-Fair; Hur Average (despite proximity to Pram).

1823 Fall: Railyard expands; Demarest produces fabric - and lumber?? - no, that must be from Pram City; both are stuil described as "Encampment".

Retrieved from "https://imperialism.fandom.com/wiki/Pipren_(Imp1)/Red?oldid=6278"
Community content is available under CC-BY-SA unless otherwise noted.