Start a Wiki
The New World represents the undiscovered parts of the world in Imperialism 2, by contrast with the great powers and neutral states of Europe and immediate surroundings, the "known world" or Old World.

When you use the European Old World map, the only way to reach the New World is by going west, and the map ends just west of the New World. 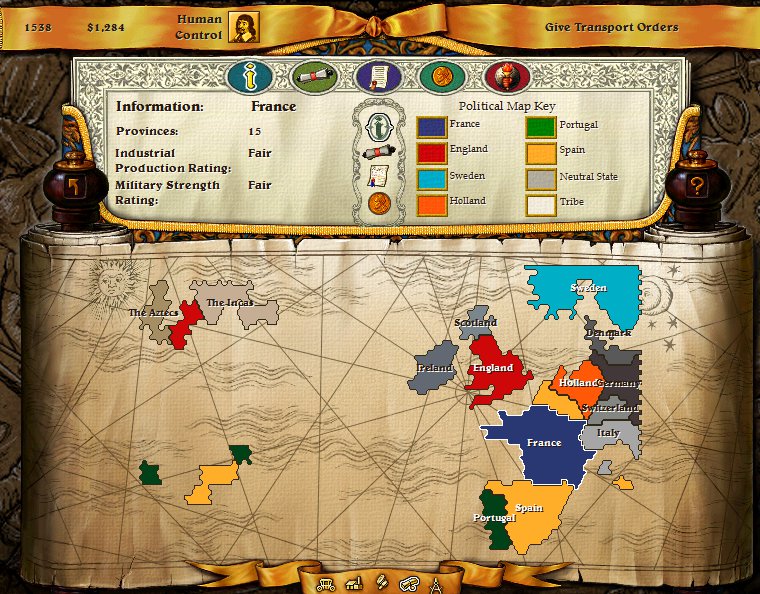 With a random map, however, the world is round and you can reach the New World going east or west.

Discover its coast with your ships. You first see (on the Zoom out screen) the beaches fronting any sea zone that adjoins the zone a ship is in. When your ship moves to one of those zones, every tile adjoining those beaches appears. Note that the port tile for any tribal capital (as with any Old World nation) is a separate sea zone, which will account for the occasional gap in the observed coast initially.

Discover the interior with your explorers (and/or by conquering a province, which lets you see the whole province).

Exploit it to improve your power. It is the only location of luxury resources and riches, and it provides fish and the standard minerals and timber. Diplomacy may be the most profitable long-term approach, but most AI nations make some early captures, so you probably should too.

There are ten "tribes", also included in the description "minor nations" along with the European "neutral states", though the Manual tends to call only the latter "minor nations". The following list is probably incomplete; please add province names as found.

Retrieved from "https://imperialism.fandom.com/wiki/New_World?oldid=5585"
Community content is available under CC-BY-SA unless otherwise noted.