Start a Wiki
"LumberPlenty (Imp1)" has been tried as a map key for Imperialism. It appears on a list in gamefaqs "Contributed By: TheLastNight and Snuff-A-Luff"

Good timber for the red GP.

Robin played one in 2012, saving at nearly every season for the first 40-odd turns. Some detailed research notes could be derived from them.

Started again from the same capital in 2014, establishing consulates in five MNs that had good fibre and mineral exports, then next turn establishing in another good one that nobody else had established in. Traded with all as much as possible. Embassy in Wodan after a while, and a Developer arrived soon after. 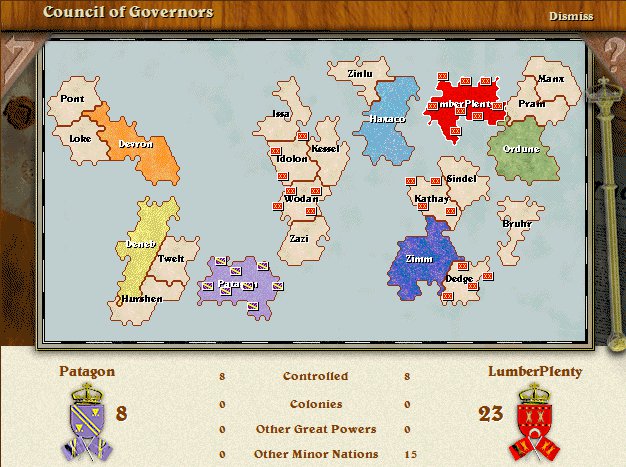 Winter 1828: University expands. Winter 1829: Deneb DW on Haxaco: we honour alliance and join in; so do our other allies and others except top nation Patagon; so we need more guns if we want a decent slice of the action. Capturing Hopatcong in the north-west would cripple Hax, but it's fortified so we may go for next-best Secaucus. 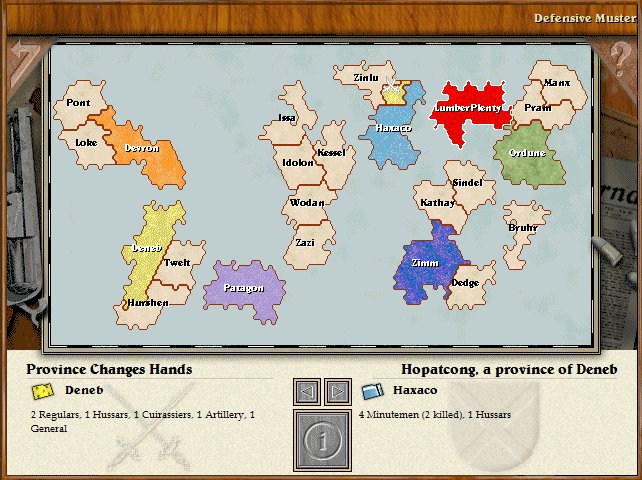 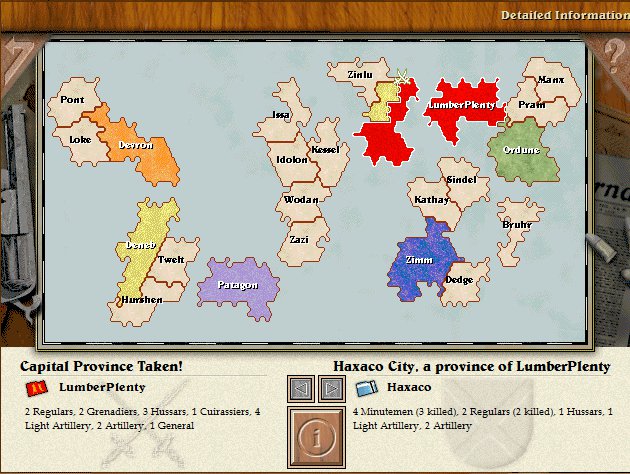 Astounding! What was Deneb doing? We nearly lost two units, but they knew when to retreat. Anyway, in Winter 1832 we are celebrating our glorious victory along with the colonization of Wodan and the completion of a port producing 2 cotton, various food, 1 lumber, and 1 fabric in the west of what was Haxaco. Next colony target is Loke, which is also a rich green on the relationship map; offer it $1,000 annuity and a pact. Spring 1832: Loke declines; railyard expands; hamlet of Haxaco City grows into a village and produces fabric. Spring 1833: 1st Admiral; cease grants to Loke because our adviser said it was too much under the influence of another GP. Win ter 1834: embassy in Kathay (needing more coal). Summer 1834: embassy in Dedge. 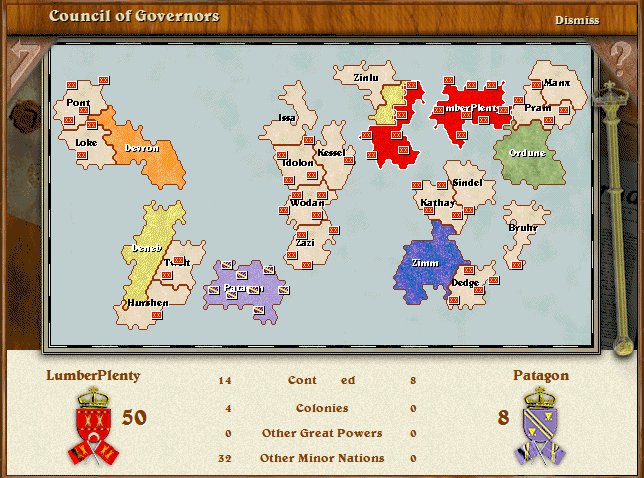 Diplomacy beats armaments again! Spring 1835: 2nd General. Pram submits to deneb. Summer: Sindel submits to Devron. Winter 1836: Devron DW on Loke: we defend (and colonize), so do Zimm and Ordune, but Deneb retires from alliance. Bug with internal transport (saying we had "0" capacity when we were moving nobody by rail) let Dev take a Loke province, then a second one, but by Winter 1837 we have regained one (making it ours, not Loke's) and seem set to retake the other and gain one, as well as invading Sindel. We did, but Pacheco was stoutly defended and we were stalled for a long time. Summer 1838: game freezes as we send huge force into Pacheco.

Retrieved from "https://imperialism.fandom.com/wiki/LumberPlenty_(Imp1)?oldid=6150"
Community content is available under CC-BY-SA unless otherwise noted.