Welcome to the Imperialism Game WikiEdit

1997 saw a new turn-based strategy game "Imperialism": seven Great Powers and sixteen Minor Nations start after the Battle of Waterloo.
Rule the world without firing a shot - if your diplomacy is good enough (helped by intelligent production and trading with subsidies and bribes).

Soon came Imperialism 2: six Great Powers in 1502, with most of the Minor Nations in the "undiscovered" New World, with untold luxuries and riches. The "First Nations" get stronger in time, if they survive.

Over a decade later, the games are still being played and discussed and modded.

This wiki helps players of those games and the developers of the next (free) versions. You can edit it - jump in and help!

"Recovery of France 1820" - a scenario for Imperialism

Playing France is graded "Hard" but may be Nigh-On Impossible if Great Britain attacks early; so build an army fast as a deterrent! See http://apolyton.net/showthread.php/149120-Imperialism-Recovery-of-France-Scenario

This is from Imperialist forum ("All work on this forum is licensed under a Creative Commons Attribution-Share Alike 3.0 Unported License. unless otherwise stated"):

I just thought I'd start a new thread to discuss the Ottoman Empire in the 1820 scenario. My starting point comes from a thread discussing France in the same scenario, but I don't want that thread to diverge too much from a discussion on France.

The main issue that comes up for the Ottomans (and indeed, just about every nation) is how to stop GB from getting a Council of Governors (CoG) win in 1835 before you even have time to do anything. As Russia, Austria, or Prussia, I usually solve this problem by joining in on the attack on France once it invariably gets started by GB. So I'm usually the #2 nominee in the 1835 CoG vote and there are at least enough dissenting votes to stop GB from winning.

The tip offered was to build an extra Frigate turn 1 and head off to seize the 4 northern provinces of Britain Read more ...

Weblogs and other news

See more >
Contribute and help make this the best resource for Imperialism and related games. You could find a "stub" article and expand it. Or look at Special:WantedPages and click one of those to start it. To start a completely new article (after doing a Search to check that it's not already here under a slightly different name), just enter the title in the box below and click the button.

Not sure where to start?

If you are new to wikis, see Help:Getting Started. 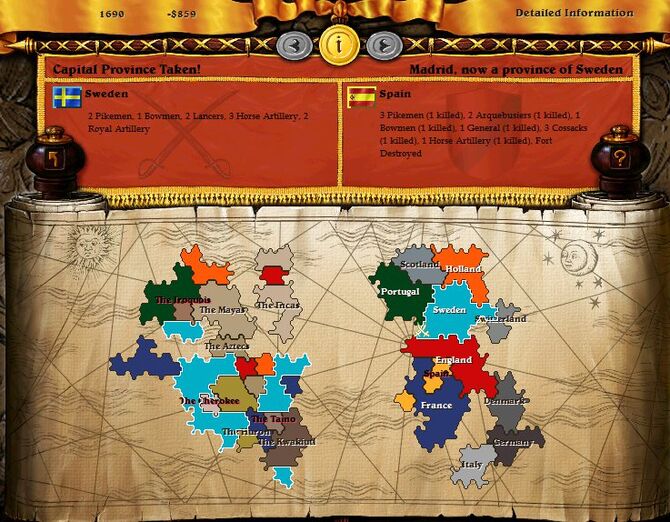 Want your community included? See how!

Retrieved from "https://imperialism.fandom.com/wiki/Imperialism_Game_Wiki?oldid=6800"
Community content is available under CC-BY-SA unless otherwise noted.