Imperialism is a now freely-downloadable turn-based strategy game for Microsoft Windows and Apple Macintosh computers, developed by Frog City Software and published by Strategic Simulations ("SSI") in 1997. In Imperialism, the player is the ruler of a 19th-century Great Power (one of seven), and aims to become ruler of the world by conquest or by vote, taking advantage of the Industrial Revolution while moving to world dominance.

Imperialism runs in Windows 95 compatibility mode (making a more modern version of Windows sometimes difficult to read if the game is still open in another window).

The game is free to download from some websites as "Abandonware" and can be legally bought from GOG.com.

Random maps do not represent the real world, and most of the territory names are made up. Play multiplayer or single player against computer nations.

The combination of hexagonal tiles and "Minor Nations" suggests that the game may have been one of the inspirations for Civilization V; players of the latter may try this game and see what else is familiar.

Its numerous help screens are fairly easy to find and probably explain much of what you want to know once you have read them all. The game appears to have been very well thought out (though one might wonder when starting the tutorial game and seeing that various technologies shown with dates in the 1820s were all allegedly purchased in 1815; the dates such as "Spinning Jenny 1828" could be for historical interest, in which case that one, at least, is misleading. More likely they refer to the normal availablity date under "normal" mode and have been ignored to make a tutorial more concise.).

There are two ways to play Imperialism: in a fictional, randomly generated world (which can be identical to what someone else found if you use a "map key"), or in a historical scenario.

In the first case, the player selects one of seven "great powers". The goal is to be voted world ruler by an absolute majority of the "Council of Governors", in which all provincial governors of the world convene once in a decade. If no absolute majority is ever reached, the game continues until the year 1915, when the power with the largest number of governors behind it wins the game. Although victory is determined by the Council of Governors, the game score is determined by how much a player has built, including the size of a Great Power's military, labor force, transport network, merchant marine, diplomatic standing and number of provinces controlled.

Empire building can be achieved through either diplomacy or conquest. In either case, the empire must have a solid economic grounding, which is established by exploitation of the country's resources (timber, iron, etc.), by industry (for example, turning raw materials iron and coal into steel) and by trade.

In the historical scenarios, the player chooses a European industrial power (depending on the scenario, Great Britain, Spain, France, Netherlands, Prussia, Germany, Austria-Hungary, Sardinia, Italy, Russia and the Ottoman Empire are the commonest available). The game may start not in 1815 but in 1820 (apparently so that France isn't too weak at the start of the game), in 1848, the year of revolutions, or in 1882, at the start of the arms race that eventually led to World War I. The winning of the game is still the same, except that in the 1882 scenario the Council of Governors does not convene until 1915.

Imperialism is entirely turn-based. Each turn, players make their decisions in five screens: the map screen, where "specialists" (prospectors, engineers, etc.) are put to work, and military orders are given; the transport screen, where transport capacity is allocated; the industry screen, where production is determined and workers are recruited and trained or employed in various ways; the trade screen, where offers and bids for the next trade session are determined; and the diplomacy screen, where world information is available and diplomatic decisions are made.

When all the players click the "End turn" button, the orders are processed. Turn-based trade sessions, diplomacy sessions (the acceptance/declining of treaties) and battles follow. Battles too are turn-based, and they can be either fought by the player or left to the game AI. Naval battles are always handled by the AI.

In multiplayer mode, at most 7 players can play together over a network. Games can be played over a LAN or the Internet. Imperialism offers a tutorial mode and five levels of game difficulty. Game editors and mods have also been published to create new scenarios, such as a world map. 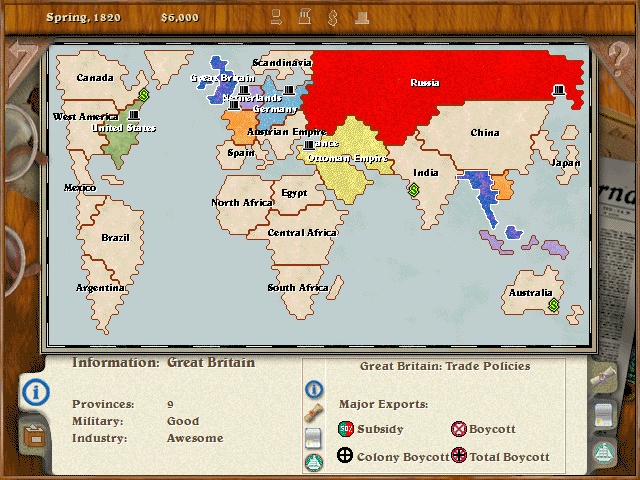 Imperialism's economic model is a kind of mercantilism where the state controls production and engages in trade. To produce anything, you need raw materials. These can be bought on the world market, or gained by exploitation of resources in the player's country. For instance, timber can be obtained by exploiting forests. It can subsequently be transformed into lumber or paper in a lumber mill. Lumber can be used to expand internal transport, to increase factory output, or for producing merchant ships and warships. It can also be processed further into furniture, which is used to recruit new workers, but more commonly is sold on the market to produce revenue. Paper is used to train workers for higher levels of productivity, and then educate them so they can serve in more advanced military units or as civilian specialists (i.e. prospectors, engineers, miners, ranchers, farmers, foresters and oil drillers).

Often a Great Power will buy raw materials (such as timber) from a Minor Nation and sell the refined goods (furniture) back to the same or another minor nation, generating revenue as well as improving diplomatic relations. From the start of the game, Great Powers compete to be the favored trade partner of resource-rich minor nations, using trade subsidies and various forms of diplomacy.

In the Imperialism diplomacy screen, various treaties can be proposed to other countries, and war can be declared on them. Also, trade subsidies may be offered. These increase the prices paid for a country's export goods, and decrease the price the other country pays for the player's exports, making trade with the subsidizer nation more profitable for the other country and thus more likely.

The treaties which may be proposed are:

All Great Powers automatically possess embassies (incorporating trade consulates) with each other at the beginning of the game.

Great Powers can encourage closer relationships with Minor Powers and each other with subsidies and grants of cash.

Although the program was written for Windows 95, it can be run under other versions of Windows. During installation under Windows NT, Windows 2000, Windows XP or Windows Vista, the user will receive an error message that Imperialism is not written for "Windows NT" and the install will abort. The Windows Compatibility Wizard must be used to enable the installation program to run. The Windows Compatibility Wizard must then be used again to enable Imperialism itself to run. Imperialism is stable under Windows 2000, Windows XP, Vista, Windows 7, and Windows 10 but it requires a change of screen resolution to 640 x 480 for complete stability. In some instances, users with multiple hard drives will need to copy the contents of the CD to their D: hard drive to do the installation, because the install program can only install from Drive D:.The Imperialism CD must be in the computer's CD-ROM for Imperialism to run; however, there are mods that enable the user to run Imperialism from a hard drive alone. When trying to run the Imperialism setup on Windows 7 64-bit systems, an error message appears and the setup will be interrupted. However, extracting the "FIRST.Z" file located on the CD will result in a valid install directory with an exe file that will run on 64 bit system without any modifications.

The Imperialism CD has an extensive collection of sound effects, original music and animation. The sound effects include sounds of battle, the sound of a telegraph and noises associated with occupations such as mining, farming, logging, construction and ranching. The music is classical in nature, resembling 19th century chamber, orchestral and martial music.

Retrieved from "https://imperialism.fandom.com/wiki/Imperialism?oldid=7014"
Community content is available under CC-BY-SA unless otherwise noted.