Start a Wiki
'"Coonwist" is a map key suggested for Imperialism by an "anonymous" contributor Special:Contributions/213.111.91.66, who had clearly played it. Now at least two more fans have started games with it.

Coonwist. Deneb (yellow GP), just unfair. 22 timber spots total with 11 of them being hardforest. 5 cotton and 3 wool spots (1 needs rr thru mountains), 4 iron mines, 6 coal mines (2 need rr thru hills), 2 oil wells. And... all of this easily accessible with ports! First port and *boom* you have 5 timber (4 hwf) and iron, another port and you have 4 forest, 1 wool, 1 iron (with a small rail from this port you'll get access to 1 iron and coal). Third port and you have 2 cotton. Small rail from capital and you have 2 coal, 2 wood and cotton. Alas you would need to wait till 36's rr thru hills to connect all the ports to capital with rail, but to control all the port (except one with 2 cotton) you'd only need to protect 2 seas. 3 minor nations on same continent having lot of forest (12 hwf, 21 f), iron (3), coal (4) and cotton (5) and wool (3) and oil (6). No gp on same continent (dunno if its good thou).

Examination of the result led one player to wonder whether that was the correct key. However, the description matches - but isn't there a difficult start with unbalanced food? Contributor didn't say where the capital was placed.

Here's one corner as it could be developed - but it needs a depot on the port tile, as User:David4k has explained. 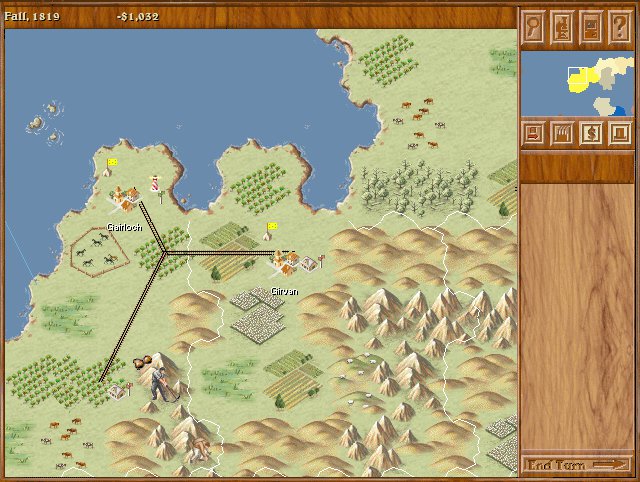 The best-placed nation apart from yellow could be red - in a game started with yellow on Easy, Red was clearly the best of the rest by about 1819 and was making serious inroads into neighbouring Zimm within 10 years, having great naval success.

On Easy level, the game puts the yellow capital in the north with a total fruit deficit (not a hard problem but you do have to start transporting fruit within about 10 turns). You also have to go quite a distance to get timber fully linked.

Progress towards 1830, when our ally Patagon has reversed initial incursions by Haxaco; we are about to grab Haxaco's north-east provinces: 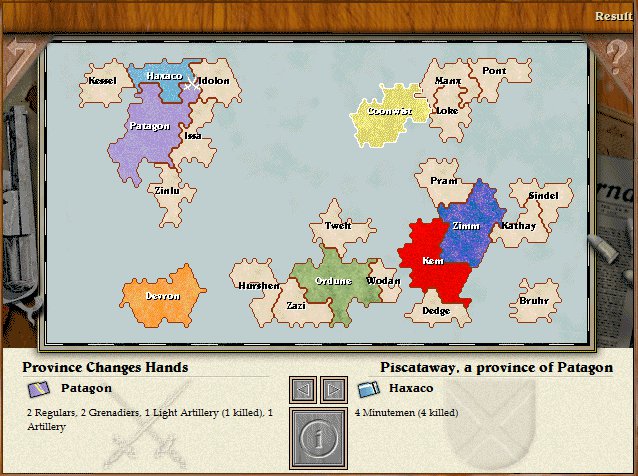 By 1833 we are clear leader in the projection and some important factors, though military somewhat middling. Loke and Manx had Haxaco embassies but nobody else was interested in them. We had deliberately not spent consulate money on them because they are the obvious targets for us once the invasion of MNs has begun. Here's a progress map: 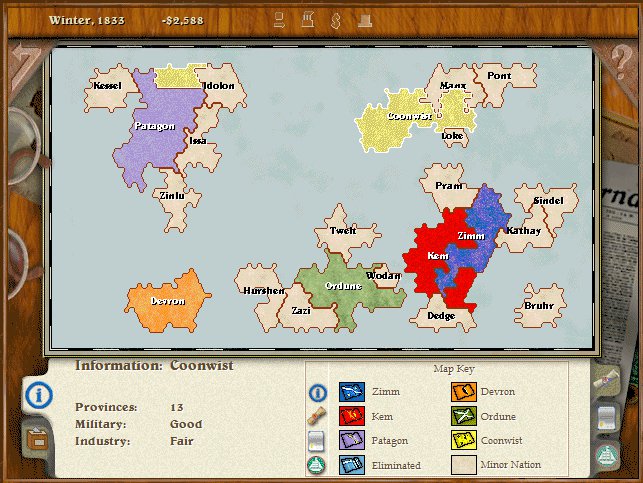 I interpreted the original poster to be playing at the Normal level because of his wording on distances involved. Also, playing at the Normal level, you get to place the Capital. I placed the Capital on the Orchard. This allows a start with food at 3/2/4, you will consume some Food until the first port is connected. So do not worry about the starting fruit problem. As was suggested by the original poster, ports in the two SE provinces are your best starting places; this will allow you access into timber, coal, iron, gold, wool and cotton in three provinces. The three neighboring Minor Nations are not very good mineral providers until you start devolping them. This tends to hurt your initial development. At least look for a promising fourth Minor Nation." David4k (talk) 16:39, September 20, 2014 (UTC)

Retrieved from "https://imperialism.fandom.com/wiki/Coonwist_(Imp1)?oldid=5572"
Community content is available under CC-BY-SA unless otherwise noted.