Start a Wiki
The capital city and its buildings are visible when you open the second menu ("Give Industry Orders") on the main menu bar in Imperialism.

The initial buildings at all levels of difficulty are eight in number:

Some of those buildings may expand at times, without direct player input.

Decorative structures such as statues may appear later, along with spaces for an Oil Refinery and a Power Plant.

Buildings you may build and/or expandEdit

On easy levels you may already see three mills (capacity 2) and three matching factories (capacity 1) when the game starts, but on harder levels you have to build those yourself, using lumber and steel, one unit of each for each unit of capacity. 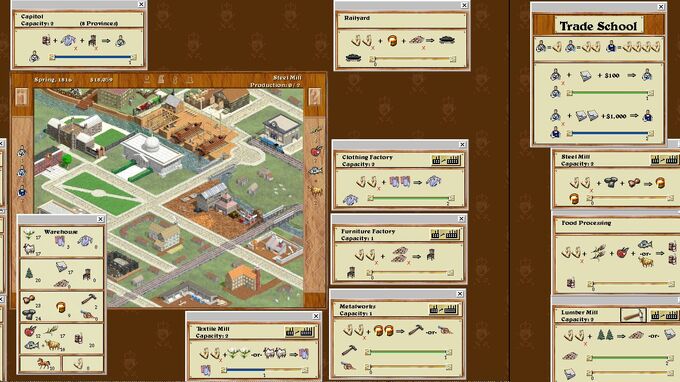 After you learn the appropriate technology, you may build an Oil Refinery and a Power Plant in the north-east. They may be available immediately in some late-start scenarios.

At all levels you have to expend lumber and steel to expand those buildings, again one unit of each for each unit of increased capacity. Factories and Power Plants double to 2 then 4, then increase by 4 per expansion thereafter, while Mills and Oil Refineries follow the same pattern except double those numbers.

Retrieved from "https://imperialism.fandom.com/wiki/Building_(Imp1)?oldid=6852"
Community content is available under CC-BY-SA unless otherwise noted.